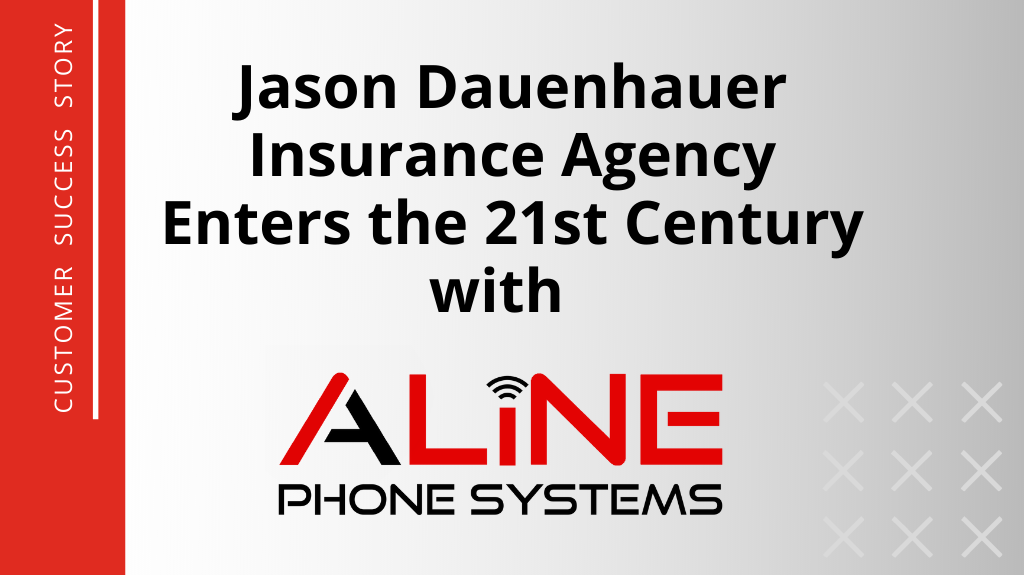 In 2019, new Farmers agent Jason Dauenhauer purchased the 42-year-old agency from a longtime Farmers agent. Based in New Caney, Texas, the agency offers property & casualty, and life insurance coverage. He and his two employees proudly serve the surrounding area.

Taking over a new insurance agency as a first-time agent comes with many challenges. One of those challenges was his technology- particularly the phone system he inherited. It was underdelivering, and he was overpaying. To bring the agency into the 21st century at an affordable rate, Jason turned to Aline Phone Systems. Aline has surpassed his expectations and eliminated the frustrations he had with his previous provider. Now he has a phone system that’s built for his agency’s growth.

When Jason took over the agency, he acquired the existing phone system, Vonage. He tolerated the system for a while, but knew that he eventually needed to make a change.

Jason’s goal is to continue automating and bringing the decades-old agency into the 21st century, and Vonage was falling short. He explained, “That product just has not kept pace with modern technology. They don’t have the proper tools, and they’re very cumbersome to use.”

But out-of-date technology wasn’t all he was missing.

Today, there are many ways to get in touch with customer service teams: phone, email, chat, ticket submission, etc. But in Jason’s experience with Vonage, live chat was the only way he could reach them, and this was painfully unacceptable.

“You had to go through their chat tool, their online tool that they had,” said Jason. “At the end of the day, the only time I talked to anyone real was when I canceled. It was a very painful cancellation process. It took 30 minutes on the phone, and I had to validate my information several times.”

Then, Desperate to retain Jason, they suddenly offered to reduce his service cost which didn’t sit well with him. “At the end of the 30-minute call to cancel, they offered me services for half price”.

Jason was also tired of being nickel and dimed for essential features- particularly the call recording feature.

Call recordings protect insurance agents like Jason from customer disputes and can save him the hassle of filing an errors and omissions claim. He paid Vonage $49.99 each month for the call recording feature alone, which included 500 hours of recording time. Jason explained his frustration:

“As an agency owner, you don’t have time to babysit and take out the calls that you don’t want recorded to save yourself time.”

Furthermore, once he reached 500 hours of call recordings, the price skyrocketed.

Jason was fed up being nickel & dimed, but that all changed when he discovered Aline.

Jason was introduced to Aline and couldn’t be happier.

They utilize Aline’s softphone equipped with countless features including free unlimited call recordings-something they didn’t have before. They also use Aline’s mobile app. It allows them to work from anywhere without providing their personal cell phone number to customers. Jason was even able to upgrade his agency’s desk phones to brand-new Yealink phones for free. Also, anytime he has a question, he can talk to a person on the phone.

A Great Tool for Now and The Future

Since adding Aline to his agency, Jason has more features and value than he ever has. The 21st century has arrived. “It’s got a lot of capability you need to learn, but that softphone feature, the chat feature, all of the interoffice communication that you can do with the tool, as well as the external communication. It’s a tool that can really enhance what you’re doing in your agency and help.”

Aline has also been easy to use. He explained, “When you’re on a call with someone, you can easily transfer that call around. You can easily create a meeting with people. You can easily conference in folks. Just drag your mouse. It’s super simple, and the support team was really good about working on our setup too.” More functionality and ease of use proved that the switch was the right one, and it’s surprisingly saving him money too.

“I think it’s a great tool for now and in the future. I believe we, as customers, also have a voice with you guys. If we see something we feel could be enhanced or whatever, you guys are good about listening to that.”

With more functionality than before, it would be safe to assume that his phone bill would be higher, but that’s not the case. Now that the agency has unlimited call recordings included at no extra cost, his phone bill has been reduced.

Whenever he has questions, the team is there to assist. “You’re so customer-oriented, so friendly, so forward with what you’re offering. Your demos and so forth are excellent. Your people are really good, and it made sense to go with Aline.”

“I appreciate the fact that I can pick up the phone and call and talk to you. Everybody’s always willing to help. I can’t say enough about how that is meaningful to us when I come from the complete opposite spectrum with a prior provider and couldn’t reach anybody.”

To learn how you can get a cost-effective phone system that’s built for 21st-century growth.